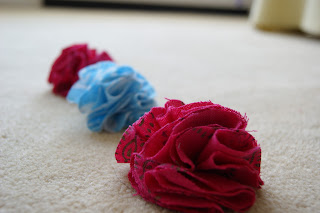 I have been wanting to make these pom-poms for so long. These are super easy and super adorable. There are endless possibilities to use them. The first time I saw them, it was used as cupcake toppers and I just fell in love with them. I wanted to make my own. And once I made them, I wanted to make more and that's what I did one evening. I made a bunch in different colors. I put them on my daughter's hairband and it looks so cute. Now it's going on her dress and shoes too..:) 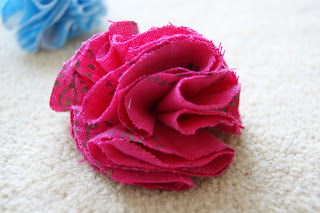 These are pretty easy to make. You need
- fabric of your choice
- Needle and thread
- Scissors
- Some thing to trace circles on your fabric, like a cup.
- Trace circles on the fabric using your cup.
- Cut 8 fabric circles
- Fold a circle in half. And then fold in half again.
- Stitch into the corner of the folded circle. Do the same with the remaining seven, putting the folded circles in the same needle. Pull your thread through all 8 circles and tie a knot. To tie the knot pull the thread through the last circle to the first circle. Make it tight and you can see your pom-pom being created.. and you'll have the ta-da moment..:)
Posted by Priyam at 5:29 PM